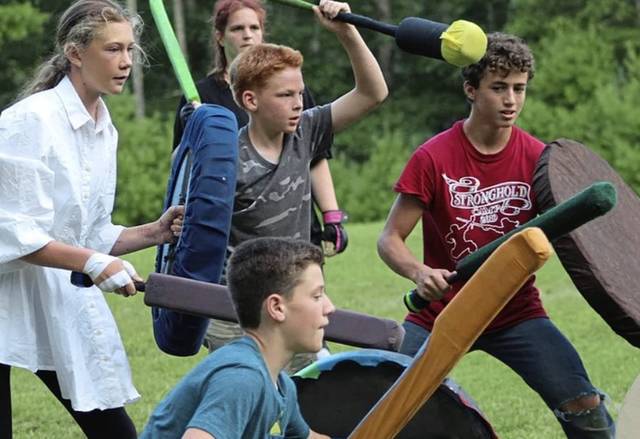 Summer Bible camps often employ a theme or center themselves around a particular activity each year.

But what about a summer Bible camp where participants duke it out on the field of battle with foam swords, spears and shields?

“I would’ve loved to have this camp when I was growing up,” said Stephen Ippolito, who along with his wife, Janeen, developed the Stronghold foam sword-fighting ministry about 12 years ago.

“We had both done it in college, and we did some after-school programs when we were both working as school teachers,” Ippolito said. “We enjoyed it a lot and after we graduated, I decided I wanted to do it as a youth ministry.”

They began with after-school programs in Philadelphia, then later in Maryland and Meadville, in Crawford County. After joining with Push the Rock, a sports-based ministry in Southeastern Pennsylvania, in 2018, Ippolito is now based in Danville and will bring the camp to Murrysville for the first time.

“We teach a lot about stance, footwork and positioning,” he said. “There’s a martial arts component, and you have to really teach the kids in order to get them better at it.”

Halfway through each camp day, the group breaks for Bible study, and Ippolito said he tries to incorporate a sort of medieval flair into the lessons to go along with the camp’s theme.

“We look at Bible stories from the perspective of ‘being a warrior for Christ,’” he said. “Then after that we do some battle simulation games.” Unlike fencing, with foam swords there is no need for participants to dress head-to-toe in protective gear. That, Ippolito said, goes hand-in-hand with the camp’s other major tenet: sportsmanship.

“We talk a lot about doing what’s honorable, even when it’s not part of the game play itself,” he said. “The reason why is that Christ commands us to, and we’re doing it to honor Him.”

As a first-time camp in a new location, there is a maximum of roughly 25 participants. Ippolito likes to say that the camp is “an outreach ministry for geeks.”

“We typically attract kids who don’t usually touch sports much,” he said. “My daughter is a great example. But when she saw the club, she wanted to be part of it, and that’s really cool.”

For more, see StrongholdSwordFighting.com. To register, go to PushTheRock.org/register and click on the “Stronghold Camps” link to find the Murrysville camp.