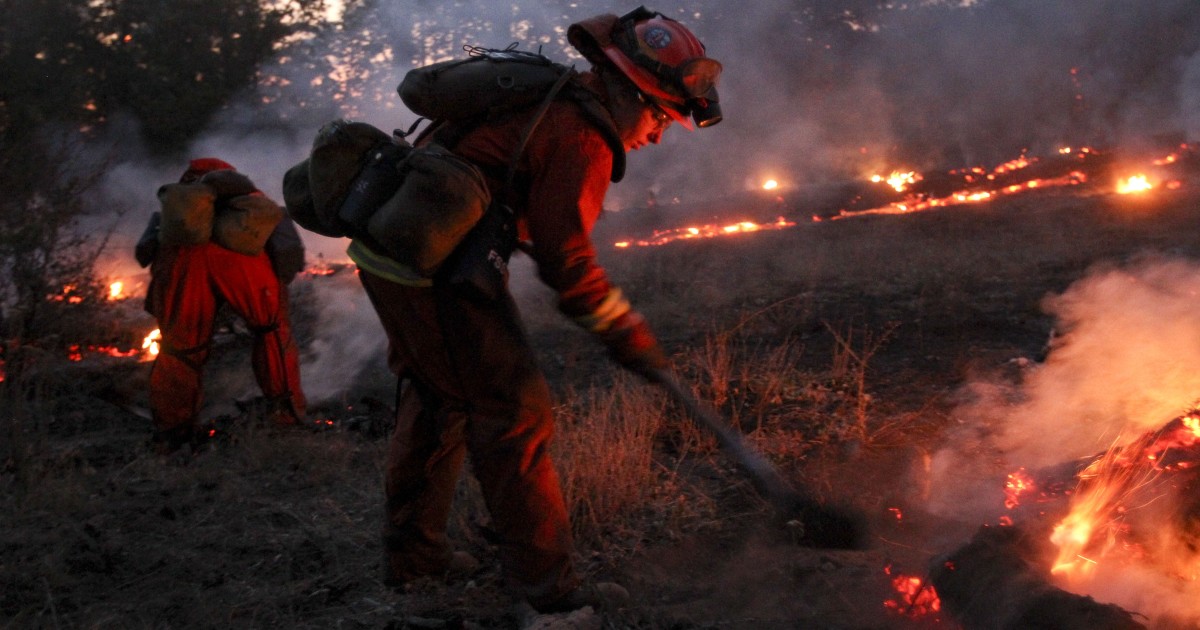 If you live in California, fire is a constant backdrop. Extreme fires used to be once-a-decade events. I remember the 1991 fire in the Oakland Hills. Growing up we had a Christmas card of family friends on our fridge, posed in front of what used to be their house. Just the fence remained. I was born in Oakland, and it was shocking to see homes in the Bay Area leveled, the ground blackened.

Now, fires in California are year-round. The flames burn hotter, faster and longer than they ever did. And because of climate change, invasive plant species, invasive beetles and massive housing developments in high-risk fire zones, those fires are more damaging to structures, species and human lives. Fifteen of the 20 most destructive fires in state history have occurred since 2007.

Today, California logs 78 more annual “fire days” than it did 50 years ago. A 2018 state-commissioned report on climate change projected that under current emissions trends, the average burn area in California will increase 77% by the end of the century. California has always had a fire problem; now that problem is a constant crisis.

Among California’s solutions is a nearly invisible incarcerated workforce that has been laboring on the front lines since 1946. Depending on the year, inmate firefighters make up as much as 30% of California’s wildland fire crews. The state Department of Corrections and Rehabilitation works with the Department of Forestry and Fire Protection and the Los Angeles County Fire Department to operate 35 fire camps in 26 counties. All the camps are minimum-security facilities and are staffed with correctional officers.

In 2015, around 3,100 inmates worked at the conservation camps — 2,150 were fire-line qualified; the rest supported the camps by working in the laundry room, as landscapers, in the office doing paperwork, as water treatment plant operators or in the kitchen. In an average year, the corrections department says, the forestry program provides about 3 million hours of service to fires and other emergencies, and 7 million hours to community service projects, saving California taxpayers about $100 million a year.

Other states including Arizona, Kentucky, Oregon, Nevada, West Virginia, Wyoming and Georgia also use prisoners to fight fires, but none of them relies as heavily on its inmate population as California does. In 2016, there were three all-female camps: one at Rainbow, between San Diego and Los Angeles, also known as Conservation Camp No. 2 (which was closed in late 2020); one at Malibu, Conservation Camp No. 13; and one at Puerta La Cruz, just east of Temecula, called Conservation Camp No. 14.

The camps are in high-risk fire zones so that the crews can be dispatched locally. The women who fight fires are the ones who hike; those who have other jobs don’t hike. The corrections department agreed to let me visit all three female camps and the women’s prison in Chino, where there is a separate forestry wing for female inmates to train. To qualify for the forestry program, the women have to be minimum custody, and they are ineligible if they were convicted of sexual offenses or arson, or have a history of escape using force or violence.

In June 2016, I drove to Malibu 13. I passed through Calabasas and Hidden Hills, two fire-prone neighborhoods that are home to Drake, Kardashians, Will Smith and Jada Pinkett Smith, Britney Spears, Katie Holmes — the list goes on. Some residents employ their own private firefighting brigades. I skirted the northern edge of Topanga and drove through the Santa Monica Mountains. Malibu 13 is surrounded by rich communities; the camp’s crews are responsible for protecting them.

The camp is carved into rugged mountains, shaded by oak trees, and looks more like a spiritual retreat than a state prison. The only sign it is a state prison is one crudely painted piece of wood, placed at the entrance, that announces rules and warnings in stenciled letters. (In all likelihood, it was painted by inmates who lived at the camp and hammered it together in the wood shop.)

It reads: “Notice to the Public: You are entering Fire Camp 13. A facility of the Calif. Dept. of Corrections. It is unlawful to bring alcohol, drugs, weapons, tear gas or explosives to the grounds. Cameras are prohibited. WARNING, entering this facility acknowledges consent to search your person, property and vehicle.”

Bill Sessa, the corrections department information officer whom I’d been emailing with for a few months, had written me the day before to say that the correctional officers at the camp “believe in the rehabilitative value of the program and get a lot of job satisfaction out of it and, of course, there is a synergy between their support for the program and the success of the inmates.”

I asked how that success is defined, what the recidivism rates are for camp as compared with non-camp prisons, and the answer was surprising — they don’t keep track of the data. So, while the corrections department is very proud of its forestry program, there’s no way to show whether it’s effective.

As I approached the main office of Malibu 13 about 7 a.m., I saw women in their orange uniforms walking from barracks to a main building. Some noticed me. Most didn’t care.

I checked in and first met Bri, dressed head-to-toe in orange, a slight brunette with blue eyes, who greeted me and explained that she clerked for the fire department, acting as the captain’s assistant (though she wanted to be on a crew). The way she talked, it almost seemed as if she were a spokesperson for the program or an inspirational speaker. She was instantly likable, open and humbled by her past and present.

In 2011, she’d been charged with residential burglary, even though she was waiting outside while it took place. She was addicted to meth; a single mother of a 4-year-old; as she put it, “a young woman who fell in with the wrong people.” She took a plea deal and was sentenced to 32 months. “This is not my comfort zone,” she told me while I waited for Camp Cmdr. John Scott. “It’s not easy, but it’s a sense of accomplishment. They offer AA here once a week, and to go through this with other addicts, and go through this together with people you trust, it’s the best scenario for a hard situation. We’re in a little bubble here; I do worry about going back to the real world.”

Bri was earnest: “Camp is what you make of it,” and “It’s a challenge every day,” and “It’s 99% mental,” and “People can open their eyes and see beauty here. It’s healing.” But those words were more than talking points. She had evolved in camp. She told me she had chosen camp over being transferred to a community-based reentry program. “This program is what changed me,” she said.

While I was in the office, a couple of correctional officers talked about a woman who had tried to escape a week earlier. She just walked away. She’d have to go back to Chino, they said, go through a “rules violation” process, and she’d potentially face additional time.

Malibu 13 has five low-slung open barrack dorms. At capacity, the camp can house 105 women, making up five crews. That day, Malibu 13 housed 63 women; the camps were facing low numbers after a realignment in 2011, which sent people with nonviolent crime convictions to county jails instead of state prisons.

In fall 2014, as the state’s courts were taking up the issue of overcrowded state prisons by order of the Supreme Court, the office of California’s attorney general, then led by Kamala Harris, argued against shrinking the number of inmates. Doing so, it claimed, “would severely impact fire camp participation, a dangerous outcome while California is in the middle of a difficult fire season and severe drought.”

When Scott emerged, he explained standard procedure — correctional officers work three shifts at Malibu: the 6 a.m.-to-2 p.m. watch, the 2 p.m.-to-10 p.m. watch, and the overnight 10 p.m.-to-6 a.m. watch. Of the women, he said: “They live together, work together, eat together — they have to be on the line together. It’s team building.”

Inmate fire crews are usually on the ground, executing grunt work, the first line of defense cutting circles to try to contain flames and stop the forward progress of a fire. They are the hand crews. To contain the fire, they establish a line, usually a few feet wide, by cutting through trees and shrubs and removing anything that could burn. Fuel. The sawyers take chain saws to growth; the buckers throw the cut growth down the steep hillsides, sometimes into sheer-drop canyons. Then, those with smaller tools follow, grinding out the roots until the line is established. What’s left is a swath of bare earth.

Scott showed me a printout of wages: Inmate firefighters could make a maximum of $2.56 a day in camp and $1 an hour when they’re fighting fires. There is no additional payment for being on call, and crews are on call 24 hours at a time. By 2019, the daily wage increased to a maximum of $5, but the hourly wage, when crews are actually on the fire line, remained the same.

Every morning after chow time, around 7:30 or 8:00 a.m., the crews stand in hook-line formation. They step, one by one, on a thick painted yellow line with the words “STOMP AND ID.” Each crew member stops at the line, stomps her left boot and shouts her last name before formally crossing from corrections custody into that of the L.A. County Fire Department.

After the women cross that line, the half-dozen fire captains who work and sleep on the L.A. County side of the facility take charge. The women start their day with physical training, a morning hike with gear, and then to work clearing fire roads and cutting brush. This type of preventive measure makes the road a containment line. It widens the area of bare soil, so that if one part of the canyon catches fire, flames won’t jump the line. That’s the logic anyway.

There was a rhythm within the fire camp. The inmates worked hard; the captains rewarded them with the opportunity to work harder.

What every foreman and captain knew was that female crews cut line tighter than men. Several told me that the women may be slower, “but the earth is bare when they’re done. The female crews are just more thorough than men.”

They were more exacting, more measured, more careful with each section of land. When they cut, they left nothing behind.

Jaime Lowe is the author of “Mental: Lithium, Love, and Losing My Mind “ and “Digging for Dirt: The Life and Death of ODB.” This article is an adapted excerpt from her new book, “Breathing Fire: Female Inmate Firefighters on the Front Lines of California’s Wildfires,” which will be published July 27.