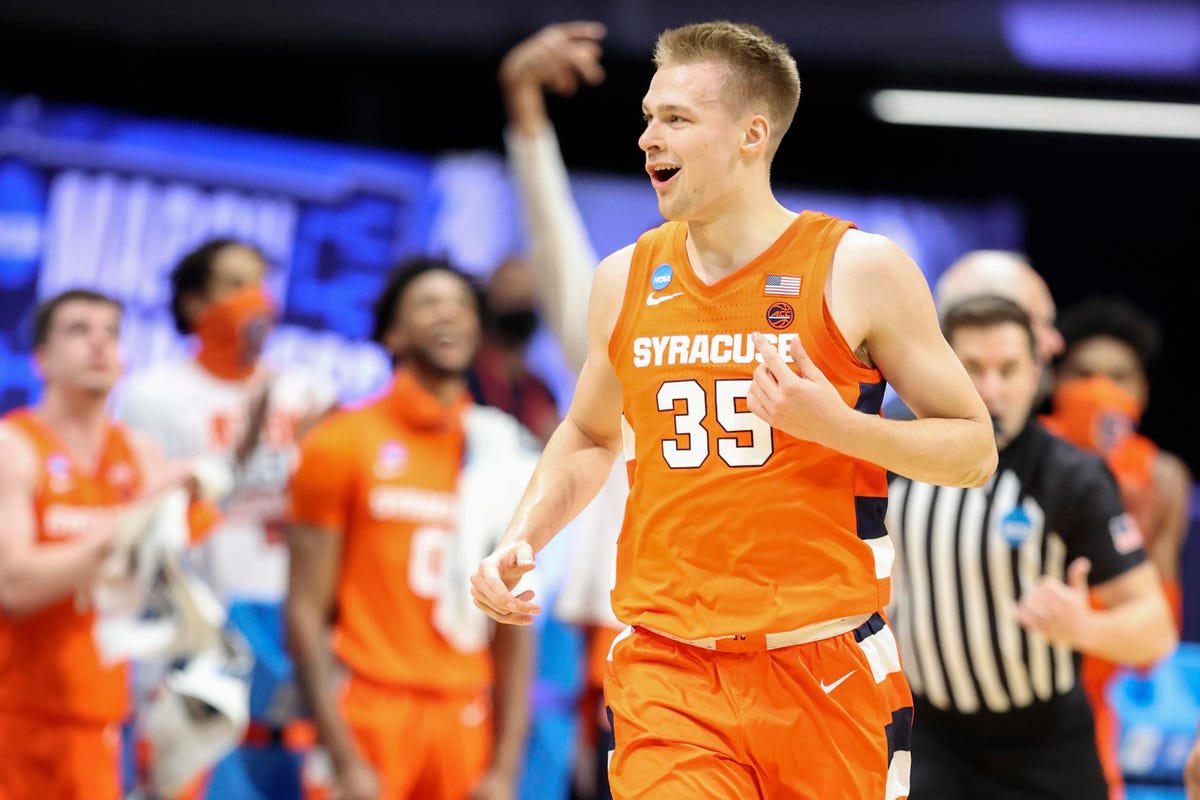 Buddy Boeheim made history last week and he didn’t sink a single three-pointer, make a flashy pass or even work up a sweat doing it.

Boeheim, the 6-foot-6 senior guard at Syracuse and son of Hall of Fame coach Jim Boeheim, became the first college athlete in the new Name, Image and Likeness era to sell gear with his name and also have it licensed with the trademark of the university. Boeheim announced July 2 on Twitter that he had teamed up with The Players Trunk “to bring you my official BUDDY BUCKETS merchandise,” including hoodies and T-shirts that feature an image of Boeheim shooting a ball and the block orange “S” logo for Syracuse basketball.

The hoodies sell for $59.99 on The Players Trunk website, while an adult T-shirt goes for $29.99. Fans can also purchase a “Buddy Buckets” inscribed mini-basketball for $75, limited edition trading cards for $45 or a 15-20 minute Zoom call with Boeheim for $200.

More “Buddy Buckets” gear could soon be on its way to the market too, including game jerseys and bucket hats.

“We got a ton of stuff we’re working with right now and just kind of seeing what the people want,” Boeheim said this week in a phone interview.

Welcome to the new era of college sports, where athletes can profit off their Name, Image and Likeness after the N.C.A.A. agreed last month to allow college athletes across the country to capitalize off their fame for the first time.

In addition to his partnership with The Players Trunk, Boeheim and his older brother Jimmy, who transferred to Syracuse from Cornell, are also on Cameo, an App that allows fans to pay for a video shoutout from a celebrity or athlete. “I’ve gotten a lot of requests and have been able to have some fun with it, so it’s been great,” Buddy Boeheim said of Cameo.

Buddy Boeheim also announced a partnership with ISlide, a company that makes customizable flip flops and socks. Boeheim even has a special promo code BB35 to get 10% off your purchase. He said he and some of his teammates are also discussing doing a team camp later this summer and trying “to get a couple hundred local kids there and we all do it together, we share the money and everyone gets a portion of it and just have fun and we know the kids would love it.”

“I think it’s great for college fan bases to be able to interact with us like this,” Boeheim said. “I think it will be great, and in five years, 10 years who knows what level this could get to? There’s so many possibilities and I’m really, really excited to be one of the first people to be able to do this.”

The “Buddy Buckets” slogan became popular last March when Boeheim exploded during the ACC and NCAA Tournaments, scoring 27, 31, 30 and 25 points in four postseason games before the Orange lost to Houston in the Sweet 16.

The Players Trunk was founded by Jason Lansing, a former men’s basketball manager at Michigan, and brothers Austin and Hunter Pomerantz. Hunter is a former head manager for the Syracuse men’s basketball team, which helped him not only eventually strike a deal with the university for use of its logo but develop a friendship with Boeheim as well.

“When I was a freshman he was the head manager, he was a senior,” Boeheim said of Hunter Pomerantz. “And over the past year what he’s done with Players Trunk has been incredible, how he’s been able to grow his brand and obviously when he texted me a week or two before this all happened and let me know he had some ideas for shirts and stuff like that, I was all in on it.”

In a phone interview, Lansing and Austin Pomerantz, who have offices in New York and Chicago, say they have been extremely busy keeping up with the rapidly changing NIL landscape.

“I think that’s the great part about being young,” Pomerantz said. “We’re recent college graduates and this is pretty much no sleep in July. We’re pretty much working around the clock here. We’re pretty resourceful in staying up to date and reading different publications.”

Many schools, including Gonzaga, have already created programs to assist student-athletes as they navigate the new NIL world.

“I think colleges and universities don’t even realize what they’re getting into and what’s best right now,” Lansing said.

As of this week, the “Buddy Buckets” gear was selling “by far” the most merchandise, Lansing said. Lansing declined to say what share of revenue the players receive, but said it was “the majority.”

Lansing speculated that “it’s definitely possible” for a player like Boeheim to earn “five figures” off his Name, Image and Likeness.

“If you’re the right athlete and you perform well, a lot of it’s on performance,” Lansing said.

Asked if he had received a check yet, Boeheim said of Hunter Pomerantz: “I know that when the time comes he’ll send me a check or whatever. I trust him, but we’re just focused right now on ideas and other stuff we can get out. He’s keeping track of all the numbers, so we’ll probably discuss that coming up next week or so.”

After his “Buddy Buckets” run last March, Boeheim and his friends at The Players Trunk know that with another run during the NCAA Tournament in 2022, they could capitalize even more.

“Yeah, definitely,” Boeheim said. “We talked about if we have a big win even putting a T-shirt out from that game or a specific moment from a game, a cool shot, a cool pose, something fun that they upload after a big game and it could take off just from that so I think when you get millions of fans watching the tournament, that’s when everyone’s watching so that would be cool. But you obviously can’t put any extra pressure to say, ‘We gotta win this to make more money.’ It’s about winning when the time comes, that’s all I’m going to be focused on.”

Some college basketball players have already indicated that part of their motivation to withdraw from the NBA Draft ahead of Wednesday’s deadline was the knowledge that they could potentially make money from NIL upon their return to campus.

“The NIL stuff had a factor into my decision,” Michigan freshman center Hunter Dickinson told ESPN.com. “Being able to make a little extra money and not have to worry about my financial situation while at school is definitely a pro. I’m glad the NCAA was able to do the right thing and allow students to make money off THEIR brands.”

Boeheim, for one, believes Dickinson could make some serious money returning to Michigan, one of the biggest brands in college sports.

“It will be a great opportunity for college to regain those top players and give them another route through college,” he said, “and I think he’s going to have a ton of opportunities to market himself and it’s going to be great for all big-time college athletes.”