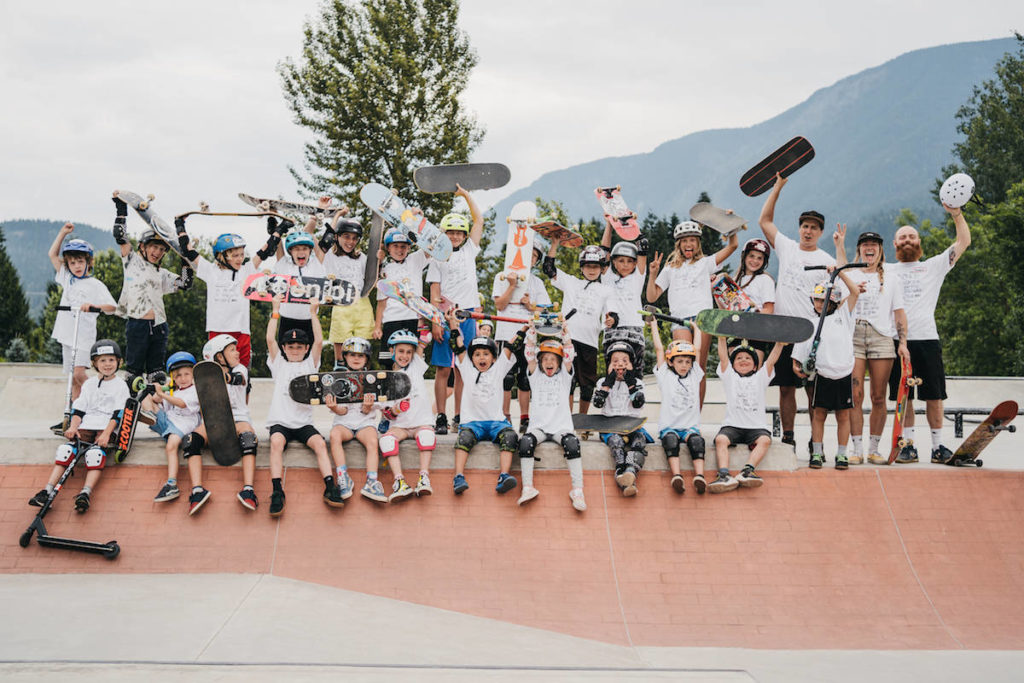 The stoke was high at this summer’s first skate camp. (Photo: Madelaine Duff)

Another successful Revelstoke skate camp came to an end with parents and kids taking to the concrete.

Under a marquee at Kovach Park on Friday (July 9), parents and kids sheltered from the afternoon sun and gathered around as they listened to organizer Adrian Giacca and other speakers. Vibes were high as kids celebrated each other’s achievements and prizes were passed around for various awards.

Kids were reminded that skating is more than just a sport, but that it’s a community as well.

“The spirit of skating, is more than just the skating — it’s getting back up, treating others well and helping your friends,” said Giacca.

Campers were encouraged to remember that being kind and skating with friends comes first.

“Skating with your friends is so helpful with progression,” said Claudia Bambi, local artist and organizer of Louise On Wheels, which is a community of girls who skate.

The five-day summer camp ran from July 5 to 9 and aimed to teach kids not just how to skate, but life skills as well, such as resilience and camaraderie. The camp sold out in one week, with 25 kids of all ages and abilities eager to improve their skills and make new friends.

Kids worked with three coaches to progress at their own rate in a safe and supportive environment.

“I learned to 50-50 Grind, jump the stairs and pump in the bowl really fast,” said Fion, aged eight. “The coaches are really good and they catch you if you fall”

When asked what the best part about skating was, eight-year-old Archie said that it’s “getting air — it’s like flying.”

“Oh yeah, and skating with friends,” added the two boys, after some prompting from onlookers.

After prizes were awarded and skate camp officially came to an end, kids took to the park with their parents, eager to show them how much they’d progressed. Giacca and the other instructors were stationed around the park, helping kids one-on-one as they took turns to drop in.

Giacca began running the camp last year after Evolve Camps, an organization from Ontario, ceased operations in Revelstoke due to the COVID-19 pandemic. Giacca successfully took over, with both parents and kids insisting that Giacca’s camp was remarkably better.

“It’s more than just skating now. We play games and there’s a slip and slide. It’s better than the other camp” said Fion.

“It’s such a great camp, the coaches are amazing with the kids. They’re nurturing and good at letting them do what they want to do, but are also gentle with their coaching and tips,” said Marnie Shearing, the mother of two kids on the camp.

“We love it and we hope the city keeps running multiple weeks of it every summer. It is the best camp that Revelstoke has to offer.”

Another sold-out skate camp is scheduled for August. Anyone interested in donating can head to Society Snow and Skate, where gear purchased will be awarded to kids at the next camp.