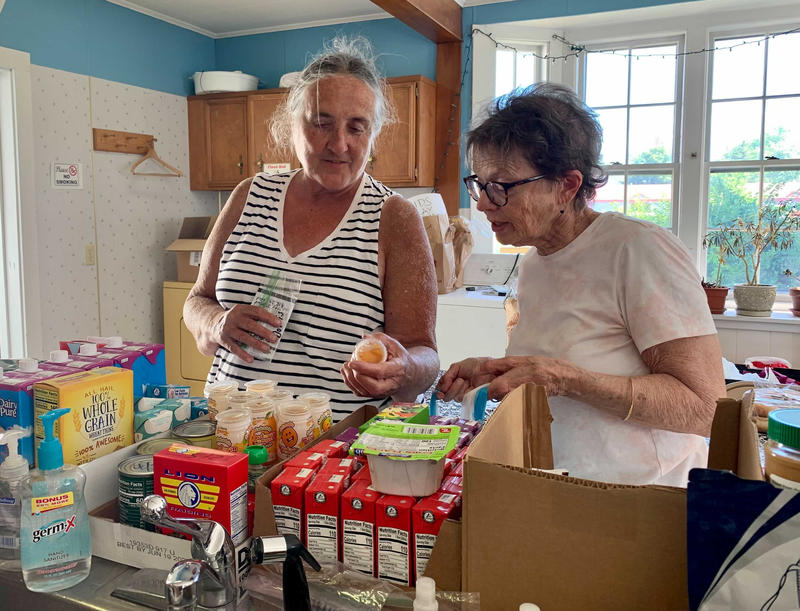 An unassuming house just a few blocks from the heart of North Conway’s tourism scene is becoming its own kind of popular local destination. It’s a resource center for people experiencing housing insecurity, called the Way Station.

Listen to the audio version of this story.

Get NHPR’s reporting about New Hampshire’s housing crunch and other top stories in your inbox — sign up for our newsletter today.

The Way Station was born in 2019, in response to growing concerns about the lack of local resources for people experiencing housing instability in the Conway area.

There’s no local public housing authority. The closest overnight shelters are about an hour away in Lancaster, Littleton or Laconia. There’s a patchwork of nonprofits and other support services trying to help in different ways, but it seemed like a lot of people were still falling through the cracks.

Doktor, the minister at Jackson Community Church, was part of a task force looking at these issues a few years ago. She and a few others involved in that effort decided they needed to do something, even if they weren’t sure where to start. The group did a lot of research, visiting agencies in other states and studying their practices.

“Along the way, [we] learned that in our area, probably the best thing was not to start with the shelter, but a day resource center,” she says.

The Lutheran Church of the Nativity in North Conway was willing to share an old clergy residence that was largely empty. It had a full bathroom, a kitchen, laundry machines and plenty of space for supplies or volunteers. The Way Station started welcoming people inside for the basics, like emergency food, clothing, camping gear and toiletries. Along the way, they focused on building relationships and understanding the needs of the people they were trying to serve.

“It’s not a complete solution, it’s one step,” Doktor says. “But if you don’t take the first step, you never get anywhere.”

Since they took that first step, it’s become clear that the Way Station was filling a big gap in the region’s safety net. Now, they support about 30 families every week, three times as many as at the start of the pandemic. But their full client list, including people who might stop in more intermittently or those they haven’t heard from in a while, is even longer.

Their clients include young people, single parents, working families, and a lot of elderly people, too. Some are couch surfing. Some might live in a hotel or an apartment, but those places might be unsafe or unsanitary. And some are completely unsheltered.

Right now, she’s living in her car with her son, who’s recovering from neck surgery.

“There are more people living in their car than you realize,” she says. “Go through store parking lots at night and see how many people are in there. They’re not just sitting there playing on their phone. They’re there because they have nowhere else to go.”

Doris and her son usually try to find a spot at a local campground, but they can’t rely on that. They’re not just competing with people on vacation, they’re also competing with many  other people who have nowhere else to sleep at night.

“There’s no housing you can find, none,” she says. “Unless you want to give a liver, a kidney, a leg. There’s just nothing out there.”

Documenting that lack of housing and its consequences in the Conway area is also a big part of the Way Station’s mission. Doktor says state and federal data about the number of unsheltered people in the region has historically underestimated the extent of the problem, in part because those counts usually happen in the winter months.

In recent years, the Way Station teamed up with the Tri-County Community Action Partnership to try to get a more accurate portrait of homelessness in the region. Earlier this year, they counted nearly 100 people — far more than what the official counts showed before the Way Station and other community partners got involved.

“We’re listening to people, we’re telling their stories and we’re turning those stories into real information that the state can hopefully use to see that our area is in dire need of assistance, just like every place else is,” Doktor says.

Now that Way Station is starting to establish itself as a trusted resource, its founders are also exploring the possibility of offering shelter beds or some other kind of housing. But they remain focused on staying afloat, trying to do what they can with limited funding and a lot of volunteer labor.

Levine is the Way Station’s first and only paid employee. He’s only part-time and those hours are fully booked, making calls to clients to check in on how they’re doing and what they need help with and running down resources to try to meet those needs.

Before he came to the Way Station, Levine says he generally understood people in the area were struggling. But he didn’t realize the extent of the problem until he began his work at the Way Station. One recent phone call, in particular, stands out.

“This elderly woman said to me, ‘I just wish I had a pillow.’ And it broke my heart,” he says. “You know, in what world do we live in where an elderly person needs to wish to have a pillow?”

He was able to get her that pillow. Just like the Way Station has been able to give other people a blanket, a can opener, a P.O. Box.

And while the team at the Way Station isn’t sure what their future looks like or how long they’ll be able to keep up with demand, for now, they’re trying to help how they can.