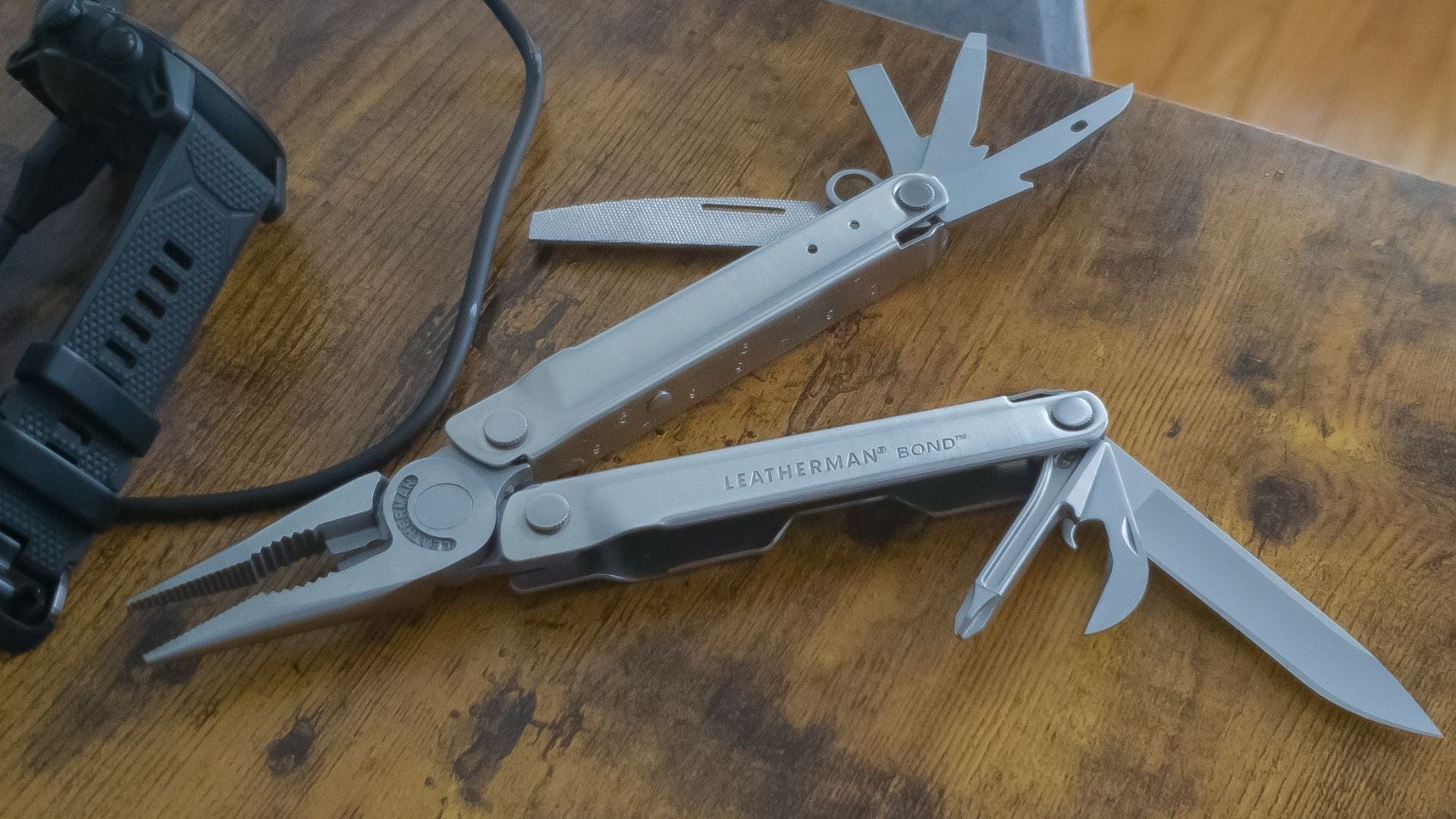 Chances are, if you say that you have a Leatherman, it will generally conjure up a mental image that looks pretty close to the Leatherman Bond. Going back to the original Leatherman Pocket Survival Tool, there’s always been a fairly consistent design language that generally features a central pair of pliers and a plethora of tools radiating outward from the grips, allowing the tool to take on nearly any task in a pinch. This formula was allegedly inspired by the creator’s difficulties with trying to repair his car with a simple pocket knife while traveling across Europe and the Middle East, finding the tools on the knife lacking and wanting a Boy Scout knife with pliers. Thus, the PST was born.

The Leatherman Bond follows this tradition both in appearance and function, featuring a series of tools that you’d expect to find, with the level of fit and finish that you’ve come to expect from mainline Leatherman products — no frills, nothing crazy, and very much a stereotypical Leatherman multitool. But unfortunately, there are several crucial flaws to this design even beyond its somewhat long-in-the-tooth design.

The Leatherman Bond comes in the by-now-familiar gray paper box that encloses a yellow paper tray, a plastic insert, and the gray instructions card that covers the multitool and its included pouch in their respective slots in the aforementioned plastic insert. The pouch is a simple nylon pouch, secured by a metal snap, featuring a belt loop and an embroidered “Leatherman” logo patch on the front. The pouch is slightly too large for the Bond, likely being a one-size-fits-all pouch for multiple different Leatherman products. This doesn’t affect the pouch’s retention at all, but feels like a bit of an oversight in terms of quality.

The Bond tool itself comes in the folded configuration at four inches long, one inch wide, and a half inch thick. It weighs in at just over six ounces, being made entirely of steel, which gives it a pleasant heft that suggests quality and durability. When opened, the Bond is just over six inches long, which is still what I would consider in the realm of compact, although that’s relative to your hand size.

One side of the Leatherman Bond features a 420HC knife, a can opener, and a full-size fixed Phillips-head screwdriver. The other side features a file, a flat head screwdriver, a smaller flat head screwdriver, and a gouge, as well as probably the most useless Leatherman tool, the lanyard loop, which I’ve never seen anyone use. None of these tools have any locking mechanism on them, likely to comply with laws in certain jurisdictions, which prohibit the carrying of locking blades (the UK comes to mind). This presents a considerable safety hazard when using the knife, especially since there’s no sort of mechanism for you to hold the blade open against pressure, should it get caught on something. More on that in the testing portion of this article.

The pliers are naturally the centerpiece of the Leatherman, featuring the standard needle-nose and standard pliers, as well as standard and hardwire wire cutters. The plier action is stiff and difficult to use straight out of the box, and the opening hinges to unfold the Bond are similarly so. This means that to fully open and close the Bond, you need to really put effort into it, which makes it very slow to open and close, especially with one hand, while wearing gloves, or in any situation where you need pliers in a hurry.

Back to the nylon pouch — it’s belt-mounted, with no allowance for MOLLE mounting, so if you feel like having a multitool on your flak/IOTV/FLC you’ll need a dedicated pouch. This is difficult because ordinarily, I’d just carry a multitool in a pistol magazine pouch. With the Bond being much smaller than your average pistol magazine, or multitool for that matter, I feel like I’d need a much smaller, specialized pouch. Obviously, you can just put the Bond in your pocket, but then it just goes to the bottom, and now you have to dig for it if you need it. Unlike most modern pocket knives, the Bond does not feature a pocket clip. However, it does feature holes in the side of the body, which allow you to attach a pocket clip, sold separately for $5. This is an oversight in my opinion, simply because if the pocket clip is that cheap, and removable, and there’s extra space inside the box, then why not include it?

How we tested the Leatherman Bond

As with any bladed instrument that comes across my desk, the first test was to see if the factory edge on the knife can shave hair and cut paper. The 420HC knife blade came out of the box extremely sharp, and easily shaved hair and cut paper along the bias with no hitching. Unfortunately, using the knife exposed one of the first flaws of the Bond’s design, which is the fact that none of the tools have any sort of locking mechanism. The blade is basically only held open by a slip joint lock, which can be unlocked by pressure in the closing direction. This means that if you apply pressure to the spine of the knife with your thumb while cutting or carving something, and you slip off of whatever you’re cutting, you’re liable to cut your index finger. Given the very sharp knife blade, this presents the possibility of making a very deep cut that could make a bad situation worse.

This problem extends onto other tools, like the gouge or the screwdrivers, where while applying pressure to a screw, or trying to push the gouge through fabric or leather, the locks could very well fold on you, and hurt your fingers or screw up whatever you were doing (no pun intended). This essentially makes the Bond a fully-featured tool that can’t easily do anything it’s supposed to, apart from maybe using the pliers. Can you do basic cutting, screwdriving, can opening, etc? Absolutely. But the risk of the tools folding on you is too great for me to consider this safe for serious use.

I tried to put the Bond into the pocket on my Tactical Tailor admin pouch where I usually keep my multitool, and it was so small that it fell to the bottom, which made it difficult to retrieve without some serious prying. As mentioned earlier, the included pouch is belt-mount only, and even that is slightly too large. A dedicated knife pouch might be the answer for this, since those are generally very small, but that’s a lot of effort for a tool that’s as trouble-ridden as this one. The answer is probably to shell out the extra money for the pocket clip, and keep it in one of your thigh pockets. But again, that’s extra effort that you have to expend just to carry a multitool that will cut you if you apply too much thumb pressure to the spine of the knife.

Overall the construction is super solid, being made of quality steel, and with the tools exhibiting an appropriate level of finishing and durability for the price point. It’s absolutely a true Leatherman in every sense of the word, right down to a design that’s evocative of the classic PST. The blade is razor-sharp out of the box, and the blade profile is easy enough to re-sharpen for anyone who’s even passingly familiar with sharpening procedures. Finally, the host of tools is very robust, giving you something for nearly every situation, from tightening screws to opening cans, so it really is versatile.

Unfortunately, the Bond comes so close, and yet falls so far short. The aforementioned issue with the lack of a tool-locking mechanism makes it legitimately unsafe, and affects the usefulness of nearly every tool. The lack of an effective way to carry this multitool is another key flaw, with the included pouch being the only real way to do it, apart from purchasing a separately-sold pocket clip. The lack of a true lock on the blade may be something to set it up for the UK market, or something to cut costs, but either way, it severely limits the utility of the tools on the Bond, and make it a flawed tool at best and a “do not buy” at worst.

The Bond is appropriately named, similar to the James variety: Outdated, flawed, and very, very British. This is a product that’s almost there in terms of features and design, but falls short.  There’s definitely a better Leatherman out there, but if a non-locking blade is all you can buy, then this is a good one for you.

Luckily, there are plenty of other options that do everything that this fails at in a similar form factor. If you want a good, affordable Leatherman multitool that fits into the same form factor as the Bond, the Wingman and Rebar are great options that address all the features that I had a problem with on this item, while remaining in the same price point. Additionally, the Rebar comes in a variety of tactical colors, should you feel that stainless doesn’t fit your mall ninja needs.

FAQs about the Leatherman Bond

Q: How much does the Leatherman Bond cost?

Q: Is the Leatherman Bond actually legal in the UK?

A: First, hi from America. Second, I’m not an attorney. Third, the Bond should be legal in the UK, by virtue of not falling afoul of the Prevention of Crime Acts and Criminal Code 139. It does this by having a blade that’s just under three inches, as well as not requiring two positive actions to close or open, which is one of the key features that I pointed out as a safety hazard. As always, caveat emptor, and know your local laws.

Q: Why are Leatherman multitools so expensive?

A: They’re generally made in the United States, and that alone accounts for the majority of the price. However, the prices are generally still very reasonable, especially given the quality that they deliver. Definitely worth every cent.

Q: Will it blend?

A: Probably not a good idea.

We’re here to be expert operators in everything How-To related. Use us, compliment us, tell us we’ve gone full FUBAR. Comment below and let’s talk! You can also shout at us on Twitter or Instagram.

Task & Purpose and its partners may earn a commission if you purchase a product through one of our links.