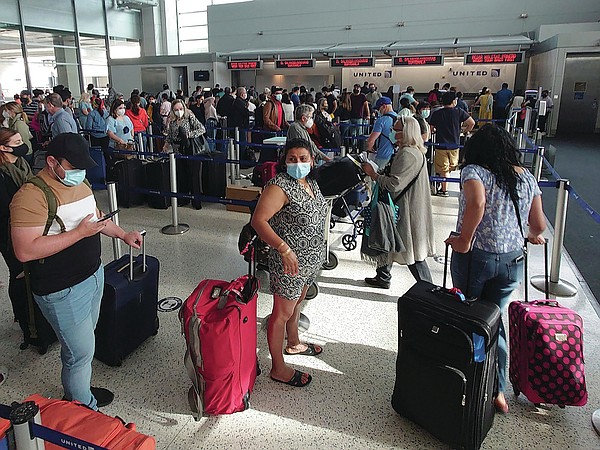 Airline ticket sales fell a little in May after rising steadily in the first four months of the year, according to a firm that tracks bookings, suggesting that demand for tickets for summer travel might not be quite as strong as airlines had hoped.

Consumers spent more than $5 billion for flights within the United States in May, a 4% drop from April and 20% lower than the same month in 2019, according to an analysis based on the Adobe Digital Economy Index. The estimates are drawn from website tracking data from six of the top 10 U.S. airlines. The airlines sold more than $21 billion in domestic tickets from January through May.

It is not clear why bookings were lower in May and whether the trend has continued into June. But analysts and airline executives have expressed optimism in recent weeks that demand for travel is strong. The number of people flying has risen relatively steadily since January, according to the Transportation Security Administration. On Sunday, the TSA screened 2.1 million passengers at airport checkpoints, the most in a single day since the pandemic began.

Other countries are increasingly opening up, too. United Airlines said it set booking records each of the past three weeks for flights across the Atlantic Ocean, and the European Union urged its member states Friday to lift a ban on nonessential travel for Americans.

People are also buying more tickets for later in the year than they were this time in 2019, the year before the pandemic took hold. Bookings for travel in November and December are up 30% compared with sales at this time in 2019.

In a securities filing earlier this month, American Airlines said strong summer sales helped it generate a cash profit in May for the first time in more than a year. Delta Air Lines has said it expected leisure travel within the United States to be fully restored this month.

Several of the most popular destinations this summer are in Hawaii, according to Adobe. Other popular stops include Bozeman, Mont.; Nantucket, Mass.; Las Vegas; Richmond, Va.; and Orlando and Fort Myers in Florida.

Most analysts and airline executives expect that a full recovery will take years — airport traffic is still down about 20% from 2019 — but hotels are faring much better. Slightly more people booked hotel rooms in April and May than in the same months in 2019, according to the index, which is based on data from eight of the top 10 U.S. hotel chains.

People are also spending more on travel-related goods. Luggage sales, for example, were up 9% in May, compared with the same month in 2019, and sales of camping gear were up 130%.