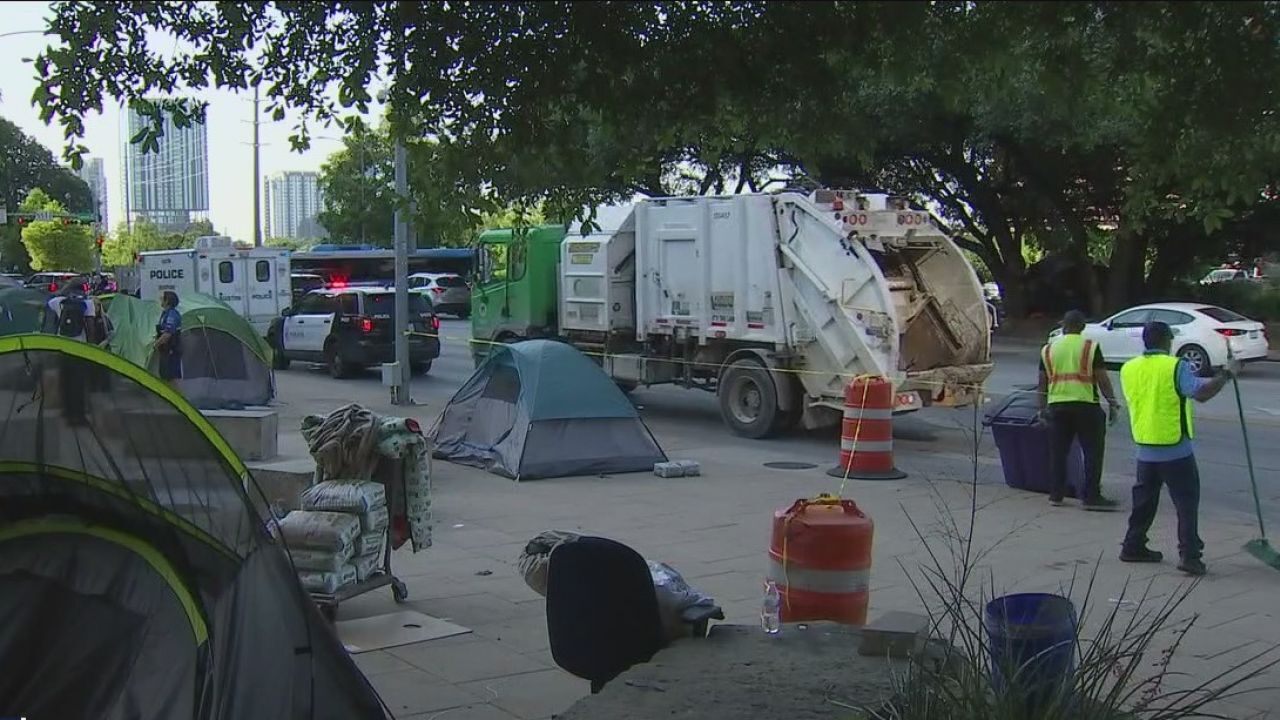 The move comes as Austin has moved into Phase 2 of its reinstatement of the camping ban. Phase 2 began on June 13.

AUSTIN, Texas – Two encampments were targeted Monday morning for the cleanup at City Hall and Monday afternoon city officials said 7 people were arrested by Austin police. They were taken into custody for allegedly interfering and being combative.

“Please don’t let these cops feel OK about what they’re doing. They should walk home from here feeling a shame, they are traitors to the people, look at them,” shouted a man with a megaphone.

However, enabling the encampment lifestyle, according to Jose Cruz, doesn’t address the complex issues of homelessness. He chooses to live on the street but makes a living doing small engine repair. Cruz told FOX7 he is perplexed how the city council took a long vacation right before the cleanup operation started. He also doesn’t understand why they left without at least setting up a safe place for the campers to transition to.

City of Austin moves to phase 2 of implementing camping ban

For the past 30 days, the city has been in phase 1. During that month, APD has visited dozens of encampments to meet with people experiencing homelessness.

The clean-up operation Monday was not part of the reinstatement of the camping ban. In a statement issued by the city, it was revealed that those living in tents at Cesar Chavez & Guadalupe were told several weeks ago a construction project would require them to relocate. Those camping along 2nd Street had been told they were trespassing and given until Sunday night to leave. Camps at César Chávez and Lavaca were not touched. Those living there and at other locations like it are still in the phased-out process. Right now, that only involves warning notices.

Removing the camps of course didn’t remove the core problem. And shortly after police left a couple of violent incidents took place. A man was seen tossing a chair into the street. He threw more items into the air and at one point sat in the middle of 2nd and Lavaca.  A few minutes later another man kicked and slammed vehicles as they drove by orange construction cones he threw out in order to block part of 2nd Street.

Austin Police arrest individuals after they interfered with a homeless cleanup operation because of a construction project occurring in that area.

“The real problem here is finding places for people experiencing homelessness to go that is safe where they’re allowed to be and get access to services that they need,” said Councilmember Mackenzie Kelly.

Kelly would like to have the Council called back for an emergency meeting. The mayor could do it, but if he fails to make that call, Kelly said one could be authorized by three council members.

As for now, the council chambers remain empty. Outside, several individuals could be seen returning to City Hall Monday afternoon with more camping gear.