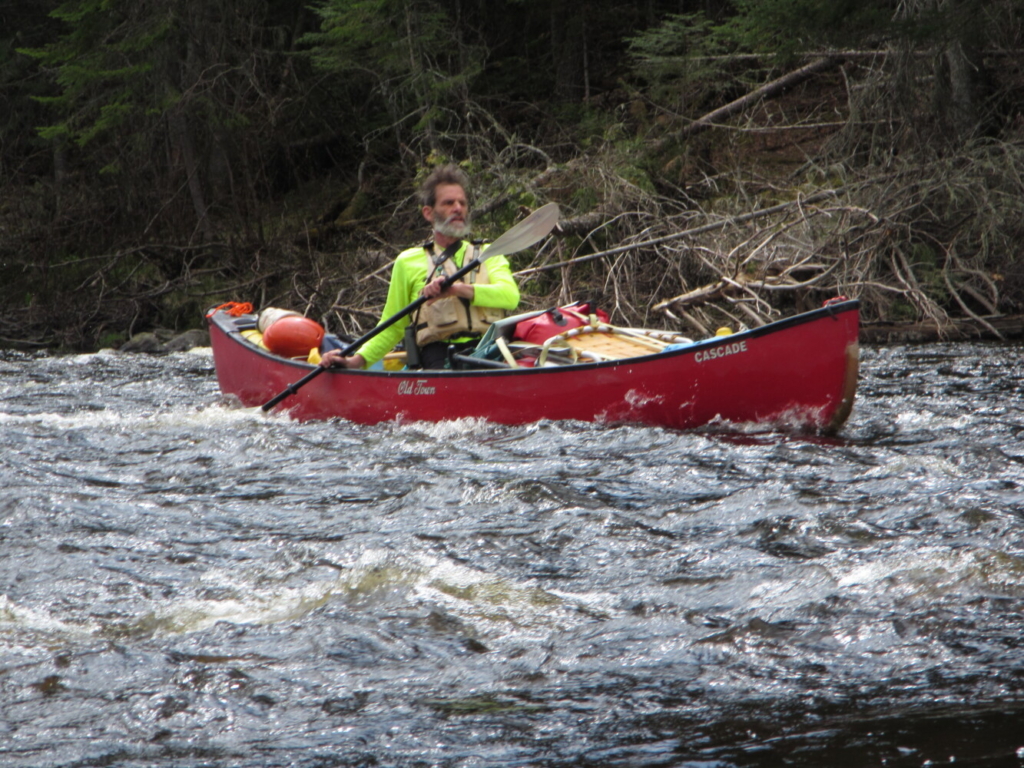 On the third day of our expedition from Depot Lake to Allagash Village, we awoke in our tents under a protective carpet of tarps to cool sunny weather. Situated on the remnants of an ancient logging road at the site of a washed out bridge on remote Depot Stream, we were about nine miles downstream from Depot Lake. As a result of effective tarp installation, our tents and gear had remained relatively dry despite heavy rains the night before. More important, based on a tiny island in the stream I had observed when we arrived the previous day, the water level had risen about three inches as a result of the storm. The additional flow was much needed as our crew of five canoes and two kayaks had thirteen more miles to paddle on the shallow Depot Stream before arriving at the more substantial Big Black River.

After breaking camp, we began our foray down Depot Stream. The benefits of the storm were immediately apparent as the continuous steep Class II rapids were difficult to navigate despite the added depth. As had been true the day before, the only tandem team in the group had more difficulties maneuvering the narrow passages as a result of the added weight of two paddlers. Despite boat scratching and a couple of rock collisions, we successfully completed Depot Stream and joined Big Black River early afternoon.

One thing was obvious when entering Big Black; it was a much larger body of water. Strong winds and occasional rain drops were experienced during our afternoon of paddling. My old Appalachian Mountain Club guidebook indicated there was a potential campsite at the bottom of a long rapid called Connors Sluice. That was our hopeful destination.

After a few of miles of flatwater, we passed Connors Brook on the right. Shortly beyond, the 2.5-mile Class II Connors Sluice Rapid began. The added volume in Big Black provided an exhilarating whitewater escapade.

A meadow on the right below Connors Sluice appeared to be the only camping option. Completely exposed to any wind or rain, we had misgivings. Fortuitously, the skies cleared and the winds diminished. Cloudless skies that night ushered in sub-freezing temperatures and by morning there was a layer of ice in our canteens and the tents were covered with frost. The cold weather quickly warmed as we embarked on a section of river called Ninemile Deadwater. While the extensive flatwater was a bit mundane, it ended with the most exciting whitewater yet encountered on the trip beginning at the site of a washed out dam. Sporadic rapids continued as the search for a potential campsite ensued. Several prospective locations ended in disappointment. A collective decision was made to push on and gamble we could find open space on Big Black Campsite, a popular stopover on the busy St. John River.

The river gods smiled on us as we arrived at the luxurious campsite just a few minutes ahead of a group descending the St. John. Since the site included a wooden canopy over a picnic table and an outhouse, we were living large! We shared tent space with the latecomers but not the deluxe picnic table.

The character of the trip changed dramatically on the St. John. Wider, steeper, and higher volume, the frequent rapids and powerful flow propelled us along at a much faster pace. On the fifth day of the journey, we traveled over 20 miles in less than four hours to another exceptional campsite at Fox Brook. An early arrival and unusually warm weather provided an opportunity for some of us to refresh ourselves in the chilly river. A cold water sissy, I tiptoed along the shore.

The highlight of our final day was Big Rapid. A two mile Class III stretch of whitewater, it was a challenge with gear laden canoes and kayaks. Everyone successfully negotiated through the surging waves and around potentially boat busting boulders in the daunting falls. The eleven mile paddle to Allagash was finished midday.

Thanks to organizer Captain Al Gaskell’s vision and persistence, we had experienced one of Maine’s most unique canoe undertakings. More remarkably, it hadn’t seemed possible only a week before. For me, it was the culmination of an inspiration that originated with my late friend Terry Tzovarras thirty-one years ago. And, it was a blackfly-free voyage!

Author of “The Great Mars Hill Bank Robbery” and “Mountains for Mortals – New England,” Ron Chase resides in Topsham. His latest book, “The Fifty Finest Outdoor Adventures in Maine” is scheduled to be released by North Country Press later this year. Visit his website at www.ronchaseoutdoors.com or he can be contacted at [email protected].