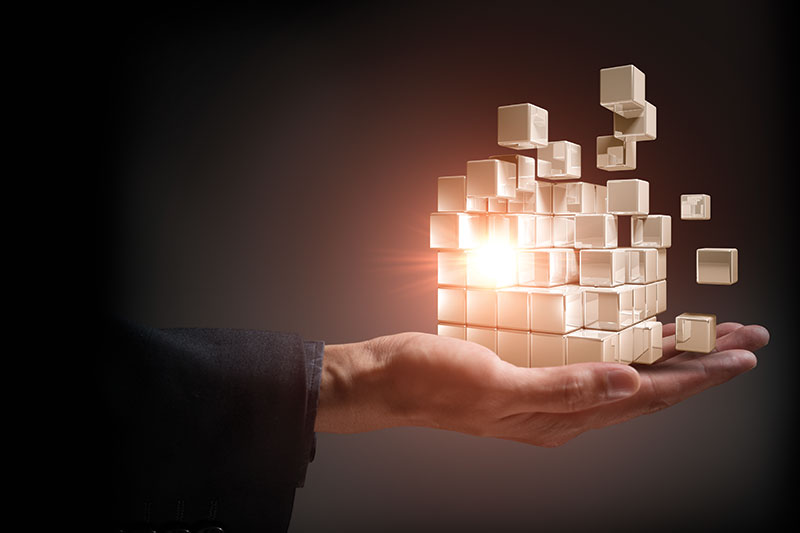 The “2021 MHI Annual Industry Report,” done in conjunction with Deloitte, opens with a quote from John Paxton, MHI’s CEO: “Supply chain resilience has never been more important,” writes Paxton. “Companies that made investments in digital technologies prior to the pandemic were more prepared and able to adapt, survive and even thrive during this disruption. They will also be ready when the next crisis inevitably hits.”

Historically, when it came to the adoption of automation and technology, especially emerging technologies, warehousing and distribution took a wait-and-see approach. The automotive industry, for instance, has been using robotics since GM installed its first pick-and-place robot on the line in 1961. That’s 60 years of robotics utilization. Our industry is just now piloting, and in some case rolling out, piece-picking robots, typically in small pilots.

Anecdotal reasons can explain the reluctance to embrace technology and automation:

The cost and availability of labor: Manufacturers grappled with high wages, especially in unionized industries; for them, automation was easier to justify. Meanwhile, labor in distribution facilities was plentiful and comparatively cheap. Throwing more bodies at the problem was a viable solution.

Land was available and inexpensive: When most distribution was from a DC to another industrial facility or big box retail store, building hubs and spokes away from urban centers was a viable network strategy. Adding space for more rack storage, for instance, was less expensive than adding automated storage.

Rigidity versus flexibility: Automation works best in predictable environments where the same task is repeated over and over, such as on a manufacturing line. As a result, automation was designed to do a thing, do it well and do it repetitively.

Distribution is inherently chaotic. Order volumes are unpredictable, the items handled change frequently and customer requirements evolve. As a rule, people and conventional handling were more flexible than automation. It’s easier to adapt your rack system to a new pallet size than an automated storage and retrieval system (AS/RS).

Risk: The risk to your business, or your career, from a failed automation project was greater than the risk of not automating.

The rise of e-commerce, coupled with a global shutdown; ever increasing customer expectations; the need to get closer to the customer, including distribution hubs near expensive urban centers; and, finally, the shortage of everything including labor at any cost, is turning all of the arguments against the adoption of innovative technologies on their heads. Survival—or, in business terms, resilience—is forcing the industry’s hands.

As Thomas Boykin, a supply chain specialist leader with Deloitte Consulting, told Modern last month, “Flexibility and resilience have always been important, but many companies treated them as ‘nice to haves.’ As the recent pandemic made clear, resilience is no longer nice to have. It’s a priority.”

In this year’s report, MHI and Deloitte once again surveyed more than 1,000 industry leaders to understand how they’re responding to the pandemic, but more importantly, how they’re transforming their supply chains through the adoption of digital technologies. (You can access the full report at MHI.org/
publications/report.) How is adoption progressing from nice to have to a priority? Here’s what they found.

The threat of disruption

For years, the term disruption referred to a new technology, a new business model or a combination of the two that upset the apple cart and left behind companies stuck in the past conventional way of doing things. Think of how the iPod and digitized music did a number on the recorded music industry or how streaming entertainment services have upended traditional radio, movie theaters and even conventional television broadcasting.

Covid-19 gave a new meaning to disruption given the scale and scope of the global shutdown of supply chains. Previous supply chain disruptions were typically regionalized and time-limited: When a hurricane threatens to hit the Atlantic coast, manufacturers and distributors in the Carolinas may not be able to predict the storm damage, but they can predict more or less when they’ll be hit and know that if they’re still standing after the storms pass, how long it’ll take to get back up and running.

This was not only different in scope and scale, it also opened the eyes of supply chain managers in two ways, according to the 2021 Deloitte “Global Resilience Report”. First, nearly two-thirds (62%) of the supply chain leaders surveyed believe similar large-scale disruptions are likely to occur in the future, yet only 30% of respondents believe their organizations can adapt and pivot to disruptions, and only 34% feel prepared to lead their organizations through those events.

What then are they doing? Forty-nine percent of respondents (49%) said they are accelerating spending in the 11 digital technologies tracked by Deloitte to position their operations to be more responsive in the future. But it gets better: “Forty-five percent plan to invest at least $1 million in the next two years, and 12% of that group plans to invest more than $10 million,” said Boykin. “That’s encouraging.”

Inventory and network optimization tools, Cloud computing and storage, robotics and automation, sensors and automatic identification led the list with just more than 50% of respondents indicating they have substantially increased or are increasing their investments in those areas.

In the middle of the pack, with an estimated 30% to 45% of respondents investing in these areas, were predictive and prescriptive analytics, Industrial Internet of Things (IoT), artificial intelligence, autonomous vehicles and drones and wearable mobile technology.

Rounding out the list, with less than 25% of respondents increasing their spending in these areas, were 3D printing and Blockchain and distributed ledger technologies. 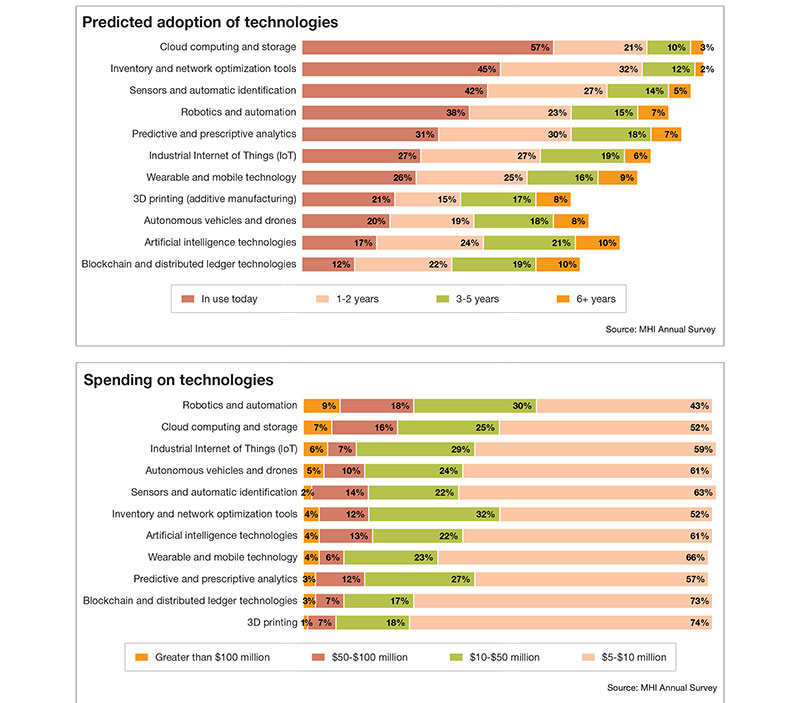 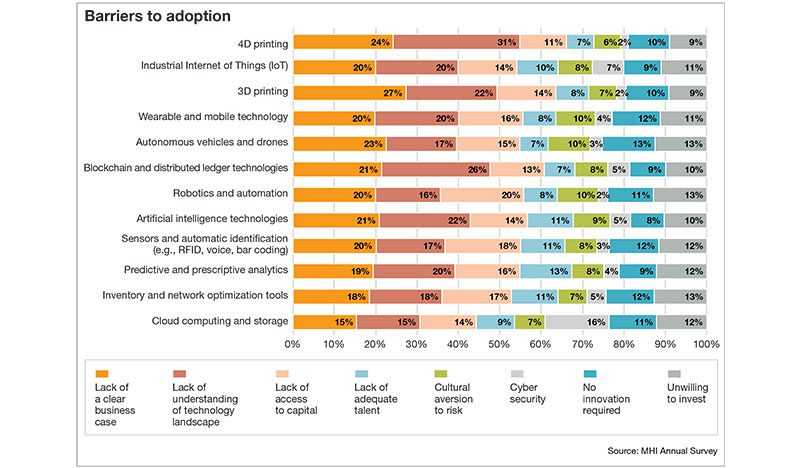 One of the report’s key findings is that respondents believe investments in digital technologies and innovation will allow them to respond more quickly and effectively to immediate challenges from a disruption; recover faster than their peers; and, as a result, create a competitive advantage in the market.

As Paxton noted, although everyone was on equal footing when it came to learning how to operate safely during a pandemic and contending with workforce and other shortages, companies like Amazon, that had already invested in digital technologies, were better positioned to continue operating and saw their profits rise significantly in the last year.

Much has been written about the need for resilient supply chains, including distribution and order fulfillment operations, and for flexible systems. One area explored in the MHI survey is how organizations are translating those requirements into their business strategies and the technologies they’re deploying to execute.

The strategies include “regionalizing their supply chains and diversifying the geographic footprint of their supply base; working to build longer-term business relationships with a few suppliers; increasing flexibility and scalability of their manufacturing and supply chain capabilities; building up safety stock of critical materials; and revisiting the trade-off between product variety and operational flexibility,” according to the report.

For example, 37% of respondents are regionalizing their supply chain and a similar number are diversifying the geographic footprint of their supply base. Forty-three percent (43%) are working on relationship building with their suppliers, which they believe will make it easier to request last minute order changes in response to sudden shift in demand or the availability of supply.

Respondents also said they are shifting from single sources of supply for critical materials, a common strategy in recent years, to multiple suppliers located in different geographies. The idea is that if a tsunami were to once again interrupt supply in Japan, a supplier in Northern Italy, India, Mexico or the United States may be able to pick up the slack.

In addition to strategic supply actions like those listed above, the top three actions being contemplated by respondents to potential future disruptions include: partnering with vendors to better understand technology applications and business benefits (48%); piloting new technologies (42%); and increasing investments and budgets for innovative technologies (39%).

Respondents also recognized that the supply chain of the future calls not just for the adoption of innovative technologies, but also for a different set of skills from supply chain managers and associates. As such, 37% of respondents said they were recruiting for different skill sets to align with future needs; 33% are changing their organizational structures and incentives to create a culture of innovation; and 30% are reskilling and training workers for emerging technologies.

At the end of the day, even automated supply chains and facilities are managed and run by people who must be up to the challenges.

Technology will be a key enabler of new supply chain strategies and to creating more responsive and resilient operations. That was reflected in this year’s survey, in which nearly all of the advanced digital technologies covered by the survey are in use today to some extent and are expected to achieve widespread adoption in the next one to two years. For example:

Cloud computing and storage: 57% are using it today with 21% planning to implement in the next one to two years.

Inventory and network optimization tools: 45% are using it today with 32% planning to implement in the next one to two years.

Sensors and automatic identification: 42% are using it today with 27% planning to implement in the next one to two years.

Robotics and automation: 38% are using it today with 23% planning to implement in the next one to two years.

Predictive and prescriptive analytics: 31% are using it today with 30% planning to implement in the next one to two years.

Industrial Internet of Things: 27% are using it today with 27% planning to implement in the next one to two years.

Wearable and mobile technology: 26% are using it today with 25% planning to implement in the next one to two years.

3D printing/adaptive manufacturing: 21% are using it today with 15% planning to implement in the next one to two years.

Autonomous vehicles and drones: 20% are using it today with 19% planning to implement in the next one to two years.

Artificial Intelligence technologies: 17% are using it today with 24% planning to implement in the next one to two years.

Blockchain and distributed ledger technologies: 12% are using it today with 22% planning to implement in the next one to two years.

More importantly, as Boykin points out, 90% of respondents expect to be using all 11 of the technologies tracked by MHI to some degree within five years.

Despite the enthusiasm for the next generation of supply chain technologies, there are barriers to adoption. For example, although robotics is likely to garnish the most investment in the next two years, just more than 20% of respondents said there’s a lack of a clear business case for the technology; another 20% said there was a cultural aversion to risk in their organizations; and 10% cited a lack of adequate talent within their organization for adoption. An estimated 12% said they were simply unwilling to invest in the technology. A lack of understanding of the technology landscape was cited by 15% to 25% of respondents in every category.

That’s not all bad news. In fact, it still bodes well for the industry. “The survey results show that many organizations have not established a clear business case for investment,” the report states. “Yet, the fact that all surveyed organizations are investing millions in those technologies anyway suggests that a proactive investment strategy … is viewed as essential for long-term competitiveness.”

As John Paxton observed, companies that made investments in digital technologies prior to the pandemic were able to adapt, survive and thrive during the last year and a half. Innovation will be essential for those who want to be ready for when the next crisis inevitably hits.