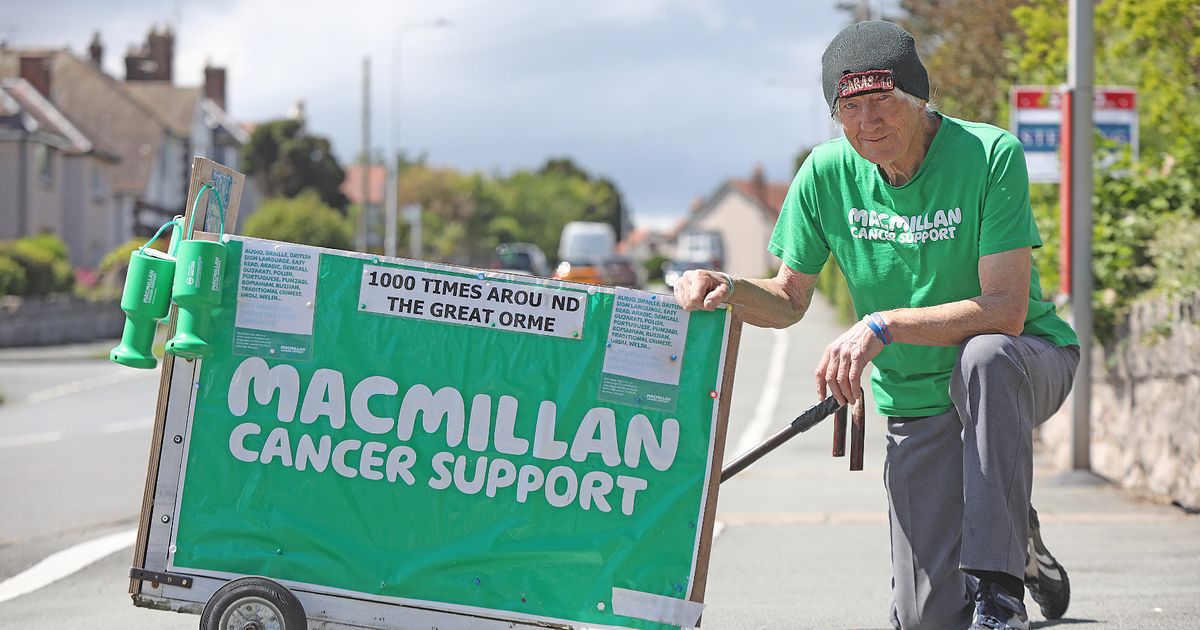 Each weekend 83-year-old Dave Page dons a fundraising T-shirt and sets out from his house for a 11-mile round trip around the Great Orme.

Sometimes he’s out all day.

He ought to find it easy, having previously pulled his trolley from John O’Groats to Land’s End, aged a mere 72.

But Dave admits age is finally creeping up on him.

“A few years back I hauled a trolley up Snowdon, loaded with bricks, which got me a few curious looks from train passengers on the way up.

“I’ve since made a new trolley, and this one is heavier. I don’t mind admitting it, I’m getting a bit worn.

Dave, an ex-paratrooper from Penrhyn Bay, has been pulling his charity trolleys for the past decade, ever since he completed an epic 603-mile trek across Britain for the Help For Heroes charity.

Another marathon outing was a trolley hike from Snowdonia to the Gower in South Wales.

At an age when many people his age are reaching for the slippers, he prefers to strap on his walking boots.

His “secret ingredient” is visco tape, more commonly used to seal pipes, which he straps around his feet.

“I know how to protect my feet,” he said.

“But these days, by the time I’m heading back across the Parade (in Llandudno), they are getting a bit sore.”

His latest fundraiser is for Macmillan Nurses. In the past five weeks he’s completed five trips – “laps” as he prefers to call them – raising £1,600 from passersby in the process.

London-born Dave was motivated to support the cancer charity because of his links with the outdoor sports community – he’s a former climbing instructor who ran a mountaineering school from his former home in Blaenau Ffestiniog.

“I couldn’t help but be struck by the number of great climbers who have died from cancer,” he said.

“Great people like Doug Scott and the incomparable Joe Brown, who both died last year.

“My own climbing partner, with whom I travelled the world, lost his 22-year-son to the disease, and his daughter is currently undergoing chemotherapy.”

On his weekly treks around the Great Orme – usually at weekends when Llandudno is busier – Dave likes to stop and chat with passersby.

In his trolley he carries memorabilia, such as a photo album of the John Lennon Memorial Garden in the Scottish Highlands.

Invariably this is a hit with visiting Liverpudlians, the idea being they may then be more generous in their donations.

But what he would really like is a higher profile – and someone to share the load during his perambulations.

“Not to pull the trolley!” he says, mildly shocked.

“I wouldn’t ask anyone to do that.

“I just need someone to wear the fundraising T-shirt, to hand out literature, that sort of thing.

“I don’t want anyone to get the wrong idea, but the ideal person would be an ex-nurse – someone perhaps with experience of dealing with cancer, or with personal experience of loss.”

Know anyone else who does incredible things for charity? Share your thoughts in the comments section below.