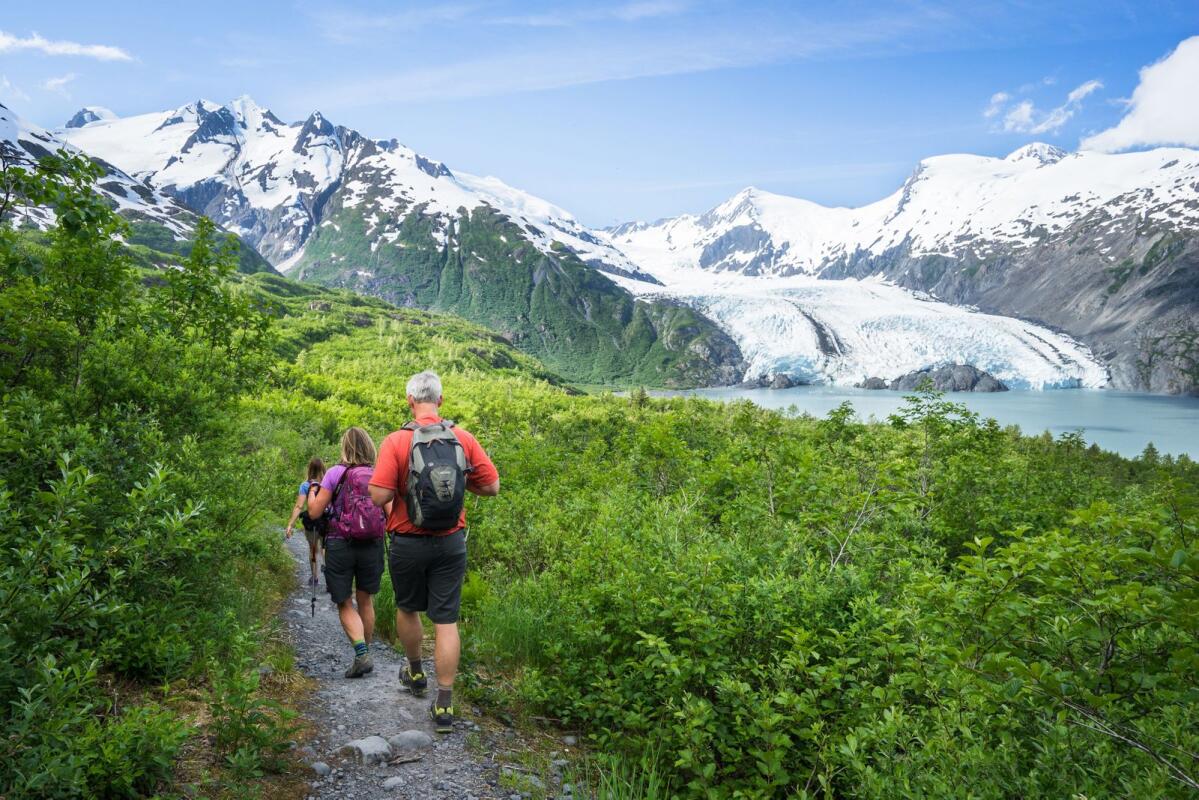 Portage Pass hikers are near the glacier (Jody J. Overstreet)

The evening was almost magical.

As the setting sun dipped toward Cook Inlet, a rising full moon cleared the mountains behind us. Dwindling light softened Denali’s glow as night descended on Alaska’s largest city below us.

Denali is North America’s tallest mountain, but we weren’t in the huge national park that bears its name. We were enjoying it from Anchorage.

People flock to Flattop to hike, paraglide and take in the sunset views of the Cook Inlet, the Alaska Range, and Mount Denali. (Marion Patterson/correspondent)

With more time, we could have golfed, dined at an amazing diversity of restaurants, taken a boat tour and fished.

Millions of Americans dream of an Alaska vacation and save for years to visit the Last Frontier. Most take a package tour that often involves cruising up the Inside Passage, overnighting in Anchorage and riding the spectacular Alaska Railroad north to Denali National Park before traveling to Fairbanks and flying home.

In all seasons, Anchorage residents bicycle for recreation and to work. (Marion Patterson/correspondent)

It’s an easy and pleasant way to experience Alaska. But, there’s a problem. Ships normally cruise through Canadian waters, which have been closed to Americans. Although cruise lines are making tentative plans to sail this year, check this option out carefully.

Consider flying because the good news is airliners bypass Canada and most Alaska recreations and experiences can be enjoyed without leaving Anchorage. Flights from Cedar Rapids connect through Denver, Minneapolis or Chicago, making it easy to get there in a day. Book a hotel, rent a car, and experience Alaska all within the state’s largest town.

Most of its 293,531 residents live in the urbanized area that’s about the land size of Cedar Rapids. Most developed land is sandwiched between two arms of Cook Inlet and the towering Chugach Mountains to the East.

Within city limits is a state park and part of a national forest. In Anchorage it’s possible to spot a trailside moose in the morning and play a round of golf that afternoon. Or enjoy a delicious restaurant seafood meal after a day downhill or cross country skiing.

People who have never been to Alaska often visualize it as a vast wilderness with few people, salmon choked rivers, giant bears and plenty of snow. In general that’s true, but few realize Anchorage is a large, modern, cosmopolitan city.

Anchorage’s rich nonprofit culture created an enormous diversity of museums and entertainment opportunities one might expect in a larger city. That, combined with outdoor adventure, makes Anchorage a fun place for people who like urban and outdoor recreation. It’s an easy city to drive in, but visitors are sometimes surprised to find four lane highways and urban traffic.

One morning we enjoyed a leisurely walk along the Tony Knowles Coastal Trail near downtown as commuter bicyclists pedaled by. Later that day, we drove to nearby Flat Top to catch the sunset view of Denali Mountain. Flat Top is part of Chugach Park, the third largest state park in the nation. It’s popular with hikers, paragliders and those savoring the spectacular view of the Cook Inlet, Anchorage and the Alaska Range to the west.

The next morning we walked a multi-use trail near the Campbell Creek Science Center just east of downtown. A sign warned — “Be bear aware!” Yes, grizzly and black bears, along with moose, live inside Anchorage city limits. We were intent on bird watching and were rewarded with spotting a water ouzel on the edge of the creek. This robin-sized bird catches its food in rushing water.

Many of Anchorage’s trails are designed and groomed for cross country skiing, fat tire bicycling, hiking and even mushing. Some are lighted to encourage use during long winter nights while others are restricted to just one or two uses.

Mushing? That’s dog sledding, and visitors can hire a musher to take them down a trail. In summer, that may mean going to a higher elevation where there’s snow.

With binoculars in hand we walked an elevated boardwalk at Potter Creek Marsh south of downtown. It is an exceptional birding spot for viewing terns, trumpeter swans, eagles and a diversity of gulls and ducks.

After we left the Campbell Creek trails, we toured the Anchorage Museum. While it features a wide range of art, the displays of intricate clothing and tools made by Native Alaskans are most intriguing.

Later we bought carry out sandwiches at Fire Island Rustic Bakeshop, basked in the sun and birded at a park overlooking Cook Inlet. Towering mountains rose from the salt water in the distance.

Few people think of Alaska as a state of museums, but Anchorage has at least 14, ranging from a zoo to the Alaska Jewish Museum, Little Lithuanian Museum and the Alaska Native Heritage Center.

Curling caught everyone’s attention in the last Winter Olympics. Anchorage has an active club and offers lessons to newcomers.

Golf? Who would think of enjoying the links in the 49th state? Visitors can play the Anchorage Golf Course. Thanks to long summer days, it’s possible to tee off at 10 p.m. There’s even the chance a moose will saunter across the fairway.

Downhill skiing. Yup. Iconic Alyeska Bowl is located in Girdwood, a settlement south of downtown. The downhill skiing season is long in this northern state. We visited in late April and watched skiers and snowboarders carving S curves and zooming downhill at terrifying speed.

Although Anchorage has an extensive road system, the rest of the state doesn’t. From the city, there’s only one road south to the Kenai Peninsula and one north to the interior.

Travelers wishing to drive beyond Anchorage can rent a car or RV in town. A number of outfitters, including REI’s big store, also rent complete camping gear. This saves visitors from buying equipment and the hassle of lugging it on airplanes.

Most of Alaska is only accessible by plane. Plane buffs can visit the Alaska Aviation Museum and watch float planes almost continually take off and land from Lake Hood near the airport. It’s the world’s busiest seaplane base. To experience the wilderness, a visitor can hire a plane to take them fishing, hunting or sightseeing in the back country.

Rich lived in Alaska for three years early in his career. Because we have family there, we’ve visited during different seasons and like the shoulder seasons of April/May and late August into early October. A winter visit is special.

Contrary to popular belief Anchorage winters are not continuously dark. The sun peeks above the horizon about four hours a day. In summer, the reverse is true. Summer days are long and winter ones are short. Anchorage residents are hardy and enjoy trails, museums, and concerts during all seasons.

Anchorage offers such an amazing array of recreation that planning a trip can be complicated. Fortunately the Convention and Visitor Bureau’s website is hugely helpful for discovering recreational opportunities and links to companies and experts who will satisfy anyone’s dreams from flight seeing and fishing, to bicycling, ice climbing and beyond.

Rich and Marion Patterson have backgrounds in environmental science and forestry. They co-own Winding Pathways, a consulting business that encourages people to “Create Wondrous Yards.”